A Free Resource from K.T. Percussion

Do you know the difference between a Xylophone, Vibraphone, Metallophone, and a Telephone?

If you know all this stuff then this article probably isn’t for you!

If you need some basic information for a school project or you are wondering how to help implement some mallet percussion in schools, then this article probably has some use for you! The Xylophone is the most common instrument of the mallet percussion family.

The bars are usually made from Rosewood, although sometimes they are made from synthetic materials.

The Xylophone has a high sharp, short sound, and is often used in Orchestral Music for this effect.

The Xylophone has a long history, having developed simultaneously in a number of different cultures. Its actual origin is unclear, having been attributed to both Asia and Africa in time; the earliest written reference comes from Mali in the 14th century. The “Balafon” or African Xylophone has been played for centuries, and they range from a few simple slats of wood without resonators, to sophisticated framed instruments, with hollowed out gourds (a type of pumkin) used as resonators. African slaves took the instrument to South and Central America where it became known as the “Marimba”.

The Xylophone is pitched one octave higher than it is generally written. The range sometimes varies from instrument to instrument, but the standard is:

This is the written range. The notes will sound one octave higher than written. The range sometimes varies, with some instruments going down to the “C” one octave below middle C

Audio Powered by itunes – where you can legally download classical tracks like this one for 99c per track!

Finally – This is the instrument music teachers have been waiting for! This Musser Xylophone is a Student model Concert Xylophone. It is a LOT cheaper than the traditional Concert Xylophone, and it is a great alternative to the glockenspiel as a beginner instrument.

This is a rosewood bar instrument, ideal for schools with more advanced percussion students. It is a semi-professional instrument model, which your school will be proud of, and it will produce a professional quality sound for many years. The Marimba is the most popular solo instrument of the tuned percussion family. It has an extensive range and a warm tone colour.

It is generally played with 4 Mallets, although it can be played with two, just like a Xylophone.

It can be played with a range of mallets, usually yarn covered, but uncovered rubber is sometimes used for effect. Mallets that are too hard can crack the bars of a Marimba very easily.

The modern instrument has developed from the Central American version of the African Xylophone, and is only approximately 100 years old. The bars are generally made from Honduras Rosewood, but it can be made from several other types of wood, which are all very rare and expensive!. The Marimba is the national instrument of Guatemala.

The Mexicans also use Marimbas, but their instruments are a little different. They have elaborately decorated frames, and special resonators which have a membrane stretched over the end to give it a special “buzzing” tone quality.

The range of the Marimba varies from 4 octaves to 5 octaves. The top note is almost always 3 Octaves above middle C, and the bottom note varies depending on how large the instrument is:

Listen to some of the solo music of Keiko Abe, Evelyn Glennie and Leigh Howard Stevens. These musicians have performed a large amount of contemporary solo literature and classical transcriptions.

Listen to an excerpt of a famous marimba solo here On this recording you will hear a very fine recording of Gordon Stouts “Mexican Dance for Marimba”. A Classic marimba solo, which shows off the sonority of the instrument. Click here for a free excerpt of Evelyn playing “Marimba Spiritual” – A Marimba Solo with three percussionists. A fantastic work, this is wonderful to watch

Audio Powered by itunes – where you can download almost any song you need for less than $2.00 per track! The Vibraphone is quite different from the Marimba and Xylophone, most particularly in that the Bars are made from metal rather than wood.

The aluminum bars give the Vibraphone a much longer sustain, and therefore requires a pedal to control the length of the notes.

The Vibraphone is best known as a jazz instrument, being used extensively in small Jazz Ensembles and Big Bands.

The Vibraphone also has a facility for a “vibrato effect”, which is often, but not always used. This is achieved by having a small metal disk in the top of the resonator under each note, which is connected via a rod to a motor which rotates, opening and closing the tube. The speed of the vibrato is variable on most instruments, and the performer can use it to enhance their sound. The composer can specify “motor on” or “motor off’ if desired, or it can be left to the judgement of the performer.

Although there have been a few non-standard instruments made, the range is almost always:

F below middle C , up 3 Octaves to F, two and a half octaves above middle C. Audio Powered by itunes – where you can legally download great jazz tracks like this one and only pay for the ones you need!

The Musser M55 is the instrument which has stood the test of time. It is widely used by professionals, and it is not over priced, considering the number of years which it will last for. Don’t buy a cheap imitation – as cheaper Vibraphones have a much thinner sound, rickety frames and they go out of tune quickly. If you need a Vibraphone, the Musser Pro Vibe is the one to own! 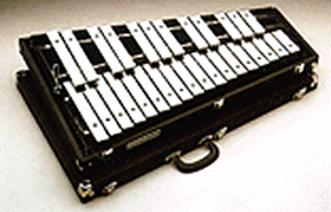 The Glockenspiel is much smaller in size than the Marimba and Xylophone and does not require resonators. Its bars are much smaller, and the case provides enough of a resonating chamber. Deluxe models that have resonators are available, but they are not common.

The high pitch and piercing sound makes the instrument very suitable for Orchestral and Band literature. It is an important instrument in a lot of Concert and Brass Bands.

Orchestral bells ring for quite a long time, and they generally have no pedal to control the sustain. They are also an extremely loud instrument, and so it must be treated with respect in the school band, otherwise it will be the conductors worst nightmare!

The range is generally two and a half octaves, and it sounds two octaves higher than written.

An excellent glockenspiel is provided in most of Pearl’s Percussion Kits – They have an adjustable stand, a music rest and mallets included. A very economic way to get a student started in percussion, and to ensure that they practice. Instead of bars, the chimes consist of tuned metal tubes, hung vertically from a frame.

They are hollow, and capped at the top. They are struck at the top, with a mallet that looks like a hammer.

They have a pedal which controls the sustain.

The standard range of the Chimes is one and a half octaves, from middle C up to F or sometimes G.

The Chimes have a complex series of overtones, and are often used to imitate the sounds of church bells.

At Sheet Music Plus They have a Huge range of music for tuned percussion, as well as resources for teachers. Just enter your request in the box below and see if they have what you are looking for!

If you have a percussion or music education related website, then you can reproduce this article on it free of charge. Just leave a link to www.ktpercussion.com on the bottom.